This house, built by French immigrant Theophile Verlaque in 1886, was the first permanent residence in the community of Nuevo, later known as Ramona. It is one of the oldest and best preserved buildings in the San Diego backcountry and is closely associated with a noted Ramona pioneer family. The Verlaque House remains a rare example of an adobe French Colonial style residence in the Western United States. It stands as a monument to the vision and character of the pioneer settlers of San Diego County.

Guy B. Woodward’s meticulous research into his Ramona roots spawned a quaint museum
bearing his name. He began assembling artifacts in the 1940’s and mining the memories of
everybody from ranchers to Civil War veterans. As President of the Ramona Pioneer Historical
Society Woodward spearheaded the opening of a modest museum in the Ramona town hall in
1979. A few years later the museum was named in his honor by the Ramona Pioneer Historical
Society board of directors. In 1985 the museum moved to the historic Verlaque house, an adobe
of French provincial design built in 1886 by Theophile Verlaque who moved to San Diego in 1870.

Placed on the National Register of Historic Places August 7, 1991

An Online Community Calendar Organized By:

Ramona Events is looking for local residents with a passion for Ramona to write feature blog posts. If you are interested, please send an introductory email to info@ramonaevents.com with detail on yourself and your area of expertise. 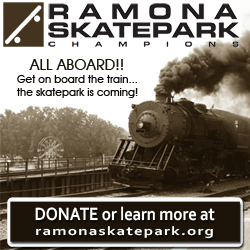